I know. I know.  It’s not Tuesday, but I’m a slacker and didn’t get to it this Tuesday.  I did get a ton done for my in-law’s 50th anniversary party coming up soon.  Yay me!  Speaking of parties, I am going to spend the next couple of weeks telling you all about a couple of my party serveware staples.  These are serving pieces that I pull out every time we have a party, game night, or whatever. 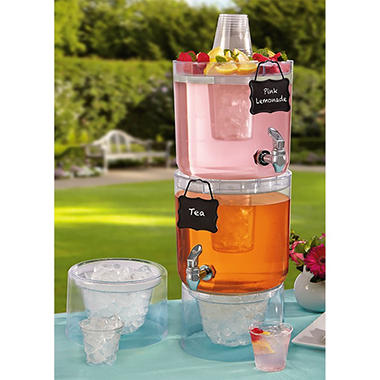 Yup, those are both pictures of the same item, but they are so versatile you can set them up either way.  How awesome is that?

These dispensers would mark my third attempt to buy something similar.  It’s not easy to find a good one.  There are lots of really cute ones, but it seems like once the manufacturers got the aesthetics down, they forgot about making them functional. .  The very first one we had was glass and had a dispenser that was about 3″ from the base.  It was just far enough down that you couldn’t put a cup under it and far enough up the jar that you had to have the dispenser more than half full or it wouldn’t work.  To be able to dispense from it, we had to have it on the edge of the counter or table.  Did I tell you guys it was a glass jar?  Do you know what happens to glass jars that have to sit on the edge of tables or counters?  Yeah, it wasn’t pretty. Now, you know why it ended up in the trash.  The second was a durable plastic which was great, but we had so much trouble with the spigot leaking that it went bye-bye too.  That leads me back to this one: the Daily Chef Stackable Beverage Dispensers.

They are nearly perfect.

Okay, here’s the not-so-perfect part.  The spigot, like all other beverage jars, does not dispense quickly.  I wish it did, but all the other stuff more than makes up for it in my book.